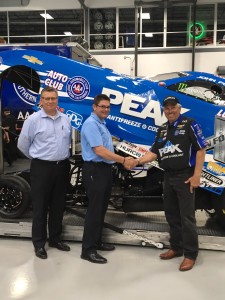 BROWNSBURG, IN (June 1, 2016) — CEO of John Force Racing Inc. and 16-time NHRA Funny Car champion John Force along with Cory Miller, General Manager of Hurco North America, announced an initial five year agreement between the Indianapolis area based companies that will continue to enhance the development and production capabilities of JFR and its Force American Made (FAM) machining company. FAM will be adding Hurco’s latest product technology with six state-of-the-art CNC machining and turning centers plus all support equipment to the machine shop area.

“I am excited about this agreement with Hurco because having technology like these machines will translate to wins on the racetrack and take us to the next level. Not only are we getting high quality machines but we are also getting the experts to help us run them and train our engineers. It was great to work out this deal with Cory and I know all the guys in the shop are excited to get these machines in here and start putting them to work,” said John Force.

“We are looking forward to entertaining customers here at our shop as well as working with them at the IMTS and PRI shows. We are also going to be using our FAM shop as a showcase and training facility for their products,” added Force.

Hurco is an Indianapolis-based company with global reach. It has divisions throughout North America, Europe, and Asia. Their corporate offices have been located in Indianapolis, Indiana since the company’s founding in 1968. Hurco engineers will be assisting John Force Racing with the set-up and training of all the new Hurco products. With more than 60 active patents, Hurco is focused on continuous innovation that makes machinists more productive and machine shops more profitable.

“John Force Racing is a legendary brand in the world of NHRA and Hurco is proud to partner with them. We often say the world of racing and machining are a lot alike because the name of the game is speed, power, and precision. The JFR team and their facility, which is just down the road from Hurco’s international headquarters, are top notch and the ability to showcase our CNC machine technology at JFR’s Force American Made machine shop will be very beneficial. I know the sophisticated technology of the Hurco CNC machines will serve JFR well,” said Cory Miller, General Manager of Hurco North America.

Hurco is installing the most technologically sophisticated CNC machines at JFR’s FAM shop, including the 5-axis VMX42SRTi and the TMX10MYSi slant-bed lathe with live tooling and sub-spindle in addition to other CNC machines from the VMX Performance Series. All of the Hurco CNC machining centers are equipped with UltiMotion, which is the motion system Hurco invented that significantly reduces cycle time as well as machine jerk while improving surface finish quality of parts. All of the HUrco CNC machines are equipped with the integrated MAX5 control powered by WinMax software, considered the most versatile in the industry as it has intuitive conversational programming, Industry Standard NC, and Hurco’s NC/Conversational Merge that blends both programming methods for increased productivity. 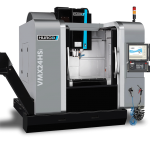