The stability of the double-column design and the overall weight of the machine (20,062 lbs.) provide exceptional accuracy and outstanding surface finish capabilities. While designed specifically for the mold market and aerospace industry, the BX40i meets the needs of any high speed machining application that requires tighter tolerances while allowing the machine to operate at optimum spindle speeds due to the machine design.

With the double-column design, there is less tool deflection and less vibration compared to a single column CNC machine and less thermal deformation due to the fact that the heat only affects the bridge structure in a straight line instead of occurring on both the X and Y axes. Another advantage is the fact that the spindle is closer to the mass of the machine on a double-column machine, which provides increased rigidity. Additionally, the BX40i is built with size 45 roller rails on all axes and linear scales are standard.

The Hurco BX40i differs from other bridge type CNC machines due to the integrated Hurco control powered by WinMax® control software and the patented motion system called UltiMotion®. The flexibility of the Hurco control makes machinists more productive and job shops more profitable because it supports multiple programming methods: conversational programming that minimizes idle time that occurs when waiting for the CAD/CAM station; industry standard NC programming; and a Hurco-specific feature called NC/Conversational Merge that optimizes efficiency even further.

UltiMotion is the sophisticated motion control software system Hurco invented that determines the optimal trajectory to run the tool and achieves programmed feed rates more consistently, reducing cycle time by as much as 30 percent or more, depending on the complexity of the part, while improving surface finish quality. With UltiMotion, cornering velocity is 2.5 times faster than conventional motion and machine jerk is reduced by at least 50 percent. Instead of fixed look-ahead, UltiMotion includes dynamic look ahead that is smart enough to adapt as required by the tool path. UltiMotion is different than the smoothing features offered by CAD/CAM software and improves upon even excellent CAM output because it provides better handling of the machine mechanics and dynamics. All Hurco CNC machining centers are equipped with UltiMotion. 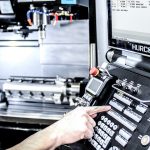 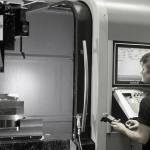