A seventh 5-axis machining center has been installed at Preston-based, tier 2 aerospace subcontractor, TGM, primarily to cope with increasing volumes of Airbus A350 work.

Two years ago, each month the firm was delivering four port and starboard aircraft wing sets comprising 20 parts each, whereas today 10 sets per month are required and the number will climb further over the next two years.

The latest addition to the firm’s 5-axis capacity is a Hurco VMX42SRTi, which has powerful conversational programming capability built into its WinMax control system.

“We already had eight 3-axis Hurco machining centres on-site, including one with an add-on rotary axis, so were familiar with the manufacturer’s twin-screen, menu-driven control system and graphical user interface,” states TGM director, Sarah Stephens. “Our operators have always found it to be user-friendly for shopfloor programming and on the latest machine only the fifth B-axis that swivels the spindle head is different, so adaptation was easy. The skill sets were already in place to create 5-axis cycles involving the positioning of both rotary axes.

“We purchased extra WinMax software to run on a laptop and use it to program around 90% of jobs run on the Hurcos, including the 5-axis machine, with data for the remaining work entered at the controls on the shopfloor.

“Essentially, the Hurco software is an inexpensive way of preparing components for 3+2-axis machining. It is like an extra CAM seat, but costs vastly less than the £50,000 purchase price and £5,000 annual maintenance of one of our top-end CADCAM packages alone.”

Cycles currently being run on the Hurco 5-axis machine contain no ISO content generated in the CADCAM systems at TGM, although it could be included via the NC Merge capability in WinMax. There are no plans to put fully interpolative 5-axis jobs on the machine either, but that would also be possible with a suitable post processor.

The Hurco VMX42SRTi, with its more than one-metre X-axis travel and 610mm movement in Y and Z, is of ideal size for producing smaller parts for Airbus A350 wings, such as ribs, intercostals and brackets. All components are aluminium except for one, which is machined from titanium billet.

Over two-thirds of TGM’s throughput is destined for Airbus, with the remainder going mainly into the Boeing supply chain, notably for the 787 Dreamliner. This Prime’s build rates are also rising, so all of the machining centres at Preston, including the Hurcos are very busy.

“One advantage of the Hurco 5-axis SRTi design is that the fifth axis is provided by a ±90° swivelling spindle head, so you do not lose Z-axis travel as on a machine with a trunnion-mounted rotary table,” explains company operations director, Steve Holmes. “The configuration fitted well with our need to produce 40 Airbus T-pieces per month that are over 30cm tall.

“The other thing we like about the machine is that we can ignore the flush rotary table and lay a large component across the full 1.27m fixed table for 3-or 4-axis machining. Alternatively, there are Op 1/Op 2 opportunities. The machine provides a lot of versatility.”

He concludes by commenting that the machine has proved reliable since it was installed in late 2016 and there have been no unscheduled maintenance issues. 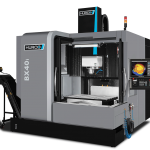 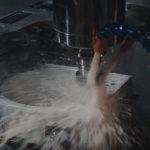